The Organs of Ellesmere

The College is home to two of the finest organs in the country, both of which are very different from each other. The Chapel contains a grand Hill, Norman & Beard of 1968 which was made famous by Brian Runnet's recording of the Hindemith Organ Sonatas. In 1980 a second organ was acquired by the college, the mighty 1864 Schulze organ which was rescued from St Mary's Parish Church, Tyne Dock. Now housed on a gallery in the magnificent "Big School", the organ is famous for its deep velvety sound and is a true Rolls Royce amongst organs. 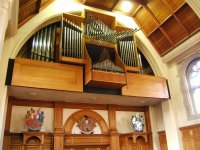 Following the devastating fire of 1966 which gutted the Chapel, the new organ was designed by Rex Lumley, the then Director of Music, Dr. Herbert Sumsion, CBE and Herbert Norman, FRSA, FISOB. The organ encompasses every technical advance of its time. Electro-magnetic actions, simulated bar-type wind chests, solid state relays, integral wind regulators and sheathed wire louvre-control action. The organ works on a 2-h.p. blower situated behind the gallery.

The specification required that all unenclosed pipes should be in view as much as possible. Extensive use of polished tin, copper, spotted metal and dark coated zinc all required for tone-colour emphasis reflect the tonal variety, vitality and brilliance in an exciting display.

Designed with being used as a teaching instrument in mind, the organ delivers a clear tone on the Great section, provides a Swell Organ of traditional English form and a uniquely Classical Positive division. 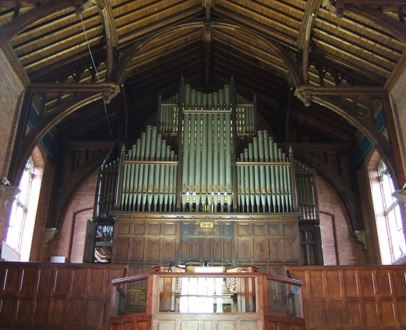 We have a lot to be thankful for when it comes to the Schulze organ. Without Prince Albert's invitation to the Schulze family to exhibit at the Great Exhibition, there would, in all likelihood, have been no examples of Schulzes' work in the UK. Of the surviving examples, four remain, whilst one is silent. Of the working examples the Ellesmere Schulze is the most original and complete.

The organ started out life in St Mary's Parish Church, Tyne Dock on Friday, 24th June, 1864. Alderman Williamson who had commissioned the organ, and who had agreed the contract price of £600 was so pleased with the finished instrument that he paid a bonus of £400!

By 1905 very few pipes could be induced to speak due to the damp conditions in which the organ found itself. Andrew Carnegie generously provided for half the cost of restoration which was carried out by Messrs Norman & Beard.

Very little has been done to the organ since. By 1979, a falling congregation coupled with the perilous state of the fabric of St Mary's meant the organ was in danger of being lost. The Diocesan Secretary of Durham, whose son was at Ellesmere at the time, put forward the idea that the organ would look magnificent on a gallery in "Big School". The Director of Music and Headmaster agreed and the Tyne Dock Schulze Organ Trust was born. A significant contribution towards the cost of removal was again met by the Carnegie UK Trust.

A closing recital was given in St Mary's on 28th September 1979, dismantling began on 1st October and on 9th May 1981 the reopening recital was held at Ellesmere College. In 2011 fresh impetus was injected into the Schulze Trust with a view of raising the necessary funds to keep this remarkable survivor in voice for generations to come.

Details of forthcoming recitals can be found on www.organrecitals.com along with the Schulze organ Facebook page.

Individuals or groups wishing to visit the College's two organs should contact the Custos of the Schulze in the first instance. Please view the downloadable organ guide (below) for details.

The Organs of Ellesmere