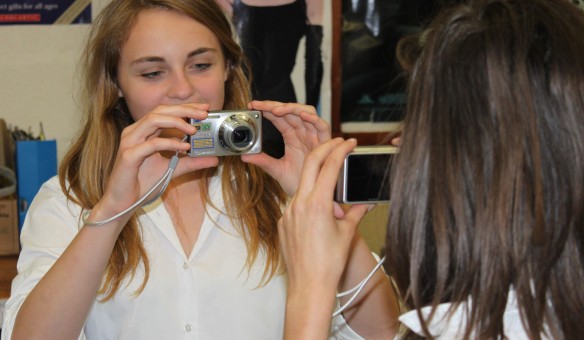 Media is an innovative and exciting part of the curriculum at Ellesmere. Academic work is stimulating and challenging, offering pupils the opportunity to be creative as well as analysing the all-pervasive media world which surrounds them. Many pupils go on from Ellesmere to take media-based degrees such as Film Production, Popular Music, Journalism, Advertising and Public Relations.

Pupils enjoy the freedom of working with the media already familiar to them, gaining confidence through group work and developing new skills creating exciting projects. From the Practical Production at GCSE to the Independent Study at A-Level, the study of Media gives many opportunities to pursue individual interests, which are actively encouraged. These might include analysing and then making film and television programmes, advertising campaigns, newspapers, designing a new computer game, recording radio shows or podcasts, or creating music videos, often for original music composed by the pupils themselves.

Creativity and originality are highly valued in Media Arts, but at the same time we give pupils the chance to learn skills such as film or photographic editing that they will need to express their creative and original id.

The Department uses Apple Macbooks for editing film and has a range of stills cameras and camcorders. A highlight of the year is the Annual Film Night, when that year's production work is shown in the Arts Centre Theatre and the coveted 'Ellie Awards' are presented.

Media is offered within the curriculum programme at GCSE and A level, and the extra-curricular Thursday afternoon Arts Awards session offers another opportunity for pupils to develop their skills, enter national media competitions or just try out their ideas alongside other pupils. There are also many trips and residential courses on offer each year, including the Arts Expos in the Autumn and Summer terms, when pupils get the chance to take their equipment out into the field. We have a lot of fun in Media, which is exactly the best way to learn!