Boy's hockey is a fast growing sport alongside Football and 7-a-side Rugby at the College and this term we are proud to have competed in a variety of age groups from the U18 First IX, to U16 and U14. 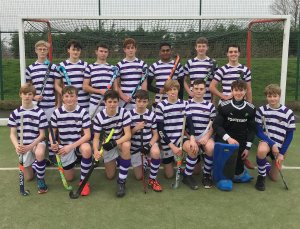 Hockey is an option for male pupils at Ellesmere College to play during the Spring term, with High Performance Hockey coached all year round. Boys hockey is accessible to players of all abilities from beginner to elite, at both recreational and competitive level. Opportunities to play and compete include social mixed hockey, inter-house hockey tournaments, inter-school hockey fixtures as well as local and regional tournaments.

Players are encouraged to join local clubs and we have strong links with Whitchurch, Deeside Ramblers and Shrewsbury Hockey Club. Additionally, boys are encouraged to join either the English or Welsh Hockey Player pathways to fulfil their ambitions of representing their country. We have a number of Ellesmere College players past and present playing at club, county and regional levels.

Ellesmere College provides an excellent environment to develop all abilities in Hockey. Players are supported by excellent facilities and staffing: