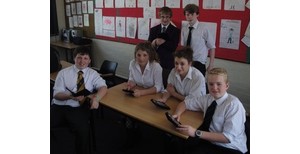 The recently launched Year 9 ‘Kindle Club’ is proving a huge success amongst its members.

Pupils are committed to read at least a novel a term and to meet throughout the term on a Thursday afternoon to ‘share and air’ their views. The first few novels have been chosen by the School’s English Department and were selected to offer a more contemporary choice of novels to the set texts that Year 9’s will begin to encounter as they embark on their GCSE English Language and Literature courses.

The main aim of the Kindle Club is to promote wider reading and encourage healthy debate without the assessment frameworks that GCSE can sometimes impose on the teaching of English Literature. Jim Underhill, English Teacher, who is running the Club explained, ‘In time, we expect our core of Year 9 Kindle Club readers to both grow in number and for them to recommend new novels. One of the aims of the Club is for pupils to enjoy their reading even more by sharing their ideas on some challenging and engaging novels.’

The Club’s first novel, ‘Child 44’ by British writer Tom Rob-Smith is a thriller that features disgraced MGB agent Leo Demidov who investigates a series of gruesome child murders in Stalin’s Soviet Russia. This novel was nominated for a place on Richard and Judy’s “Book of the Decade” list and it won the CWA Ian Fleming Steel Dagger award in 2008.

Jim Underhill added, ‘The first meeting saw an enthusiastic and committed group begin reading the gory details of ‘Child 44’ and get to grips with the Kindle technology that has been invested in to support the group’s more sophisticated and wider reading’.