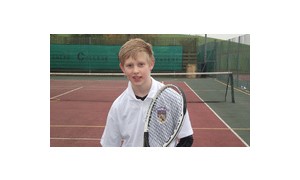 A Lower School pupil has recently become one of the UK’s top 24 players in the under 12 age group.

Talented tennis player, Sam Chapman, has been a member of the School's Tennis Academy for four years and in that time has seen his ranking climb both regionally and nationally. He has been identified by the Lawn Tennis Association as an Aegon future star.

In addition Sam has received a medal for winning the Shropshire County Winter Leaders Board in the under 14 age group, a great achievement for the 12 year old.

Stephen Welti Senior Performance coach at the College said “ We are very proud of Sam. He successfully combines his academic studies with a busy tennis training programme not to mention his competition schedule, which involves a great deal of hard work and discipline. Ellesmere College will continue to encourage and support him as he strives to reach the next level.”