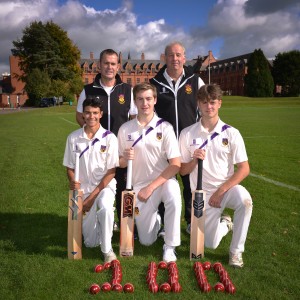 Ellesmere College has been named as one of the top schools in the country by a leading cricket magazine. The Cricketer has placed Ellesmere in the top 100 schools in Britain after being selected from hundreds of applicants to make the list.

A spokesman for the Cricketer, said: "All entries were forensically examined against an exhaustive set of internal and external criteria and we were delighted to include Ellesmere College in the list to feature in the world's leading cricket magazine."

Ellesmere has a strong cricketing tradition with several players going on to represent Lancashire, Warwickshire and Glamorgan Academies. Captain Sam Ellis, won the Shropshire U17 Player of the Year and County Age Group Player of the Year. Sixth form students have also achieved places at MCCs six university cricket academies in England and Wales, which aims to provide talented young cricketers the chance to receive top-level coaching and playing opportunities whilst furthering their education.

Gareth Owen, Director of Cricket, said: "This is a tremendous honour and recognises the hard work of staff and pupils to develop cricket in our school. We are working hard at Ellesmere College to give potential sporting stars the best platform to help them fulfil their potential."

The School boasts strong links with Shropshire and Staffordshire county cricket development programmes and sees itself as a community hub for local cricket and coach education, making itself available to the wider community for both boys and girls of all abilities.

Owen said "Whilst recent national achievements have included being regional champions and semi- finalists of the National U14 ECB Competition for the boys, and U15 Lady Taverner's national indoor finalists for the girls, long term development is more important than team success in order to provide opportunities, challenges and exposure to challenging match environments for as many players as possible".

In addition to being part of the list, coaches at Ellesmere have also received recognition as well as county and national honours. Academy coach Rod Jones received the 'outstanding contribution to coaching award' from the Shropshire Cricket Board and England Senior Academy and Lancashire women's cricketer, Evelyn Jones, received the clubs 'women's player of the year' accolade for 2017.

Ellesmere College, Headmaster, Brendan Wignall, said "One of the things about Ellesmere College that makes me most proud is the many, many opportunities that our young people are offered which provides them so many chances to excel. Nothing embodies this better than the success of sport at the school and in particular cricket. To be one of the top 100 best schools in the country for cricket is very special but I am also especially proud of the ground-breaking work that has been done with girls' cricket and their rewards in county competitions.