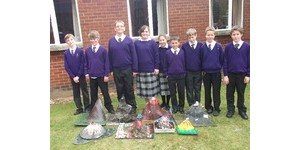 During the Easter holidays, Year 7 pupils at the School were set an explosive challenge and the winners have been announced recently.

As part of their Geography studies this year, pupils have covered volcanoes from many different perspectives and had the opportunity to create their model. The pupils were tasked with building a working model of a volcano out of suitable material. The finished models were built of many different materials and in Geography lessons this term, the pupils have had a great deal of fun watching all the eruptions.

Rhiann Waddams, Head of Geography explained, ‘The pupils gave the project a great deal of thought, made detailed plans and then set to work. The competition proved very difficult to judge as the standard was extremely high.  Marks were awarded for originality, attention to detail and whether it erupts!