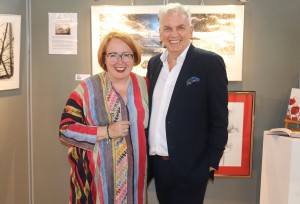 Ellesmere College played host once again to the National Art Exhibition, featuring over 300 works of art from 70 local and national artists and sculptors. Now in its eighth year, the Exhibition celebrated record attendances and sales throughout its four day opening.

The VIP Preview evening, on Wednesday 29th May, welcomed over 300 local dignitaries and art lovers, allowing them to preview all the pieces on display and chat to the artists about their work over champagne and canapés. This year saw a record number of sales on the Preview Evening from popular artists such as Maximillion Baccanello, Graham Cox RCA and local artist, Mark Warner.

The Exhibition was officially opened by feature artist Rae Smith, patron Carolyn Trevor-Jones, Chair of NADFAS, and Brendan Wignall, Headmaster of Ellesmere College, who gave a warm welcome to the guests.

The feature artist at this year's exhibition was the set designer for the stage show of Michael Morpurgo's War Horse, Rae Smith. The National Theatre's production has been seen by over 11 million people worldwide and is one of the most successful theatre productions of all time. The backdrop to the remarkable puppet horses are said to be drawings from Captain Nicholls' sketchbook in the story. However, they are in fact sketches of parts of Ellesmere, captured by talented artist, Rae, who was raised in the area. The exhibition included a selection of Rae's sketches that were used in the production.

In addition to the exhibited artwork were a selection of sculptures generously provided by the British Ironwork Centre by artists including Luke Kite.

The exhibition was also the perfect showcase for work by local primary school children involved in the 'Young Artist Project' art outreach scheme from Ellesmere College. Four local primary schools took part - Whittington, Criftins, Gobowen and Cockshutt Primary Schools - along with Year 5 pupils from Ellesmere College and built their designs and sculptures around the theme of 'Learning, Imagination and their Future Self'!

Nick Pettingale, Director of External Relations at Ellesmere College, said, "The Art Exhibition is now a well established event in the art calendar and we are very excited about next year's event being bigger and better than ever before."

With over 1000 visitors this year across the five days, Nick commented, "We are delighted with the visitor numbers this year as we aim to provide a showcase to profile both local and national artistic talent in the region and there was something for every taste and budget."

Visitors and guests were also encouraged to vote for the 'People's Favourite' piece of art or sculpture at the exhibition with the artist with the most votes winning £100. This year's winner was Max Baccanello with 'Zorba' - a detailed study of a gentleman in a flat cap in oils on canvas. Max exhibited a series of paintings commissioned especially for the exhibition including his stunning 'Nudes' range, 'Chesca' and still life paintings. 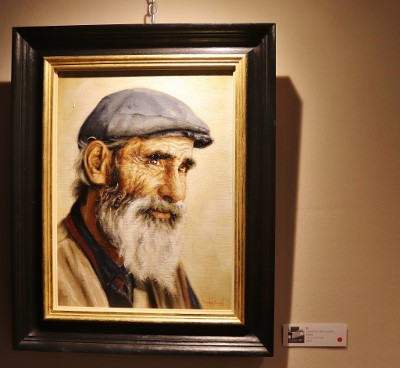