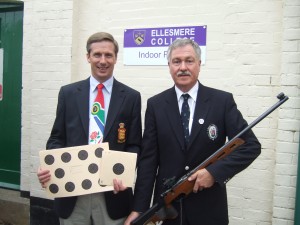 The Ellesmere College Shooting Club has recently seen the arrival of two new coaches. David Gregory, who is an active member of Crewe Rifle and Pistol Club and Tom Rylands who currently shoots for Cheshire and England and is also a member of the Great Britain Squad preparing for the World Long Range Championships in 2011.

David Gregory recently retired from Michelin Tyre Co, started shooting when he, himself, was at school. Whilst at Highgate School, he struggled at other sports but shone in target shooting. At that stage he shot .22 Rifle and .303 Target rifle and was a member of his school team. He continued at University, UWIST in Cardiff, where he became Secretary of the Rifle & Pistol club and won UWIST Colours shooting 7.62mm target rifle.

David was a member of National Rifle Association GB Black Powder Rifle Team between 1997 and 1999 and continues to support their activities as Match Director for the NRA Historic Arms Meeting held each year in Bisley.  Dave is the originator and organiser of "HBSA 1910" short range Classic meeting which is still running every June even after 20 years.

The other additional shooting coach is Tom Rylands who lives in Whitchurch, works as Managing Director of a business in Malpas. In 2008 he toured the USA with the England Team and then this year was their Captain competing in South Africa. He has also been part of the British Team since 1988, touring Canada, South Africa and Australia; and has regularly represented England in the Home Internationals at Bisley, including twice this year.

He has wide experience of team selection and has been involved in coaching of all age groups since 1993, from Great Britain senior training, assisting Great Britain Under 25's, Clubs and County shooters to Scout and Guide groups and commented, 'The facilities and keenness of the pupils to improve their shooting skills at Ellesmere College is impressive. I am enjoying supporting the training of the particularly talented individuals as well as introducing other pupils to target shooting'.