Titan Swimmers Taking On The World 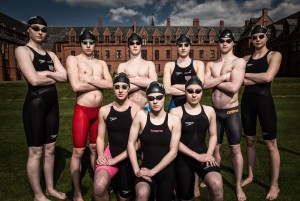 TEN swimmers from Ellesmere College will be making a splash in the pool this summer as they compete for medals in a number of the World championships and European competitions.

The Titans compete in the National Arena Premier League and swimmers have enjoyed unprecedented success at County, Regional and National level.

Lining up alongside the likes of Olympic 100 metres breaststroke champion Adam Peaty will be this years 'British Emerging Swimmer of the Year' Freya Anderson (16) and European Junior Silver Medallist Connor Ferguson (17) who will be heading to Budapest this July for the 17th Fina 'Senior' World Championships.

Both swimmers will also be on the plane to Indianapolis (USA) in August with fellow European Junior Champion, Tazmin Pugh, and British National Age Group Champion, Cassie Wild-Richards (17) to compete in the 6th FINA World Junior Swimming Championships.

Meanwhile Joseph Small (17) will be heading off to the sixth edition of the Commonwealth Youth Olympics where the likes of Jessica Ennis-Hill, Beth Tweddle and Tom Daley received their first experience of a multi-sport event.

Titans swimming Coach Alan Bircher said, "I've come to expect the unexpected when it comes to this group of amazing swimmers. I always look for a team that work together rather than being dictated too and these rewards just show us that the partnership and bond between the coach and swimmer is at an all-time high. I could not be prouder of what every single swimmer has achieved already this season. But we now have a very busy summer ahead and the expectation will raise again".