The Richness of Languages at Ellesmere College 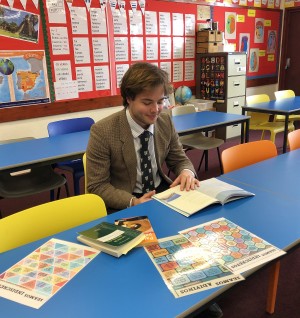 Sixth Form languages may be declining nationally, but at Ellesmere College interest from our Sixth Formers in the languages we offer, and in the cognitive benefits and transferrable skills that languages bring, remains strong at both A Level and with the International Baccalaureate (IB) programme.

Edward Paul, an Upper Sixth student, has recently accepted a place at Newcastle University and is looking forward to studying for a BA in either Spanish with Mandarin or Spanish with Portuguese.

Edward says: "Having previously lived in Argentina and India, I have grown up with an awareness of different cultures and the richness of languages. I believe foreign languages act as the perfect gateway to experiencing a wealth of cultures, and studying them to a high level allows you to broaden your mind. The British Council recently listed the top ten languages that should be studied to safeguard the UK's future prosperity and global importance, and Spanish was ranked at number one."

"My university course will therefore put me in an ideal position for a range of suitable careers that will allow me to experience life in different countries, and to enjoy a rewarding career when I finish my studies. I am very appreciative of all that my subject teachers have done to promote language-learning and global matters whilst I was in Sixth Form, and I have also enjoyed being part of a diverse international boarding house during my Sixth Form years at Ellesmere College."

About MFL at Ellesmere

The Ellesmere College community includes members of more than 30 different nationalities, so we support an interesting variety of home languages among our pupils. German Literature A for IB, German GCSE and A Level cater for our students from Austria, Germany and Switzerland. Equally, native speakers of Russian and Chinese enjoy bespoke lessons to prepare them for A Level and GCSE examinations.

The department has also offered Arabic, Italian, Japanese, Polish, Romanian and Vietnamese lessons at native speaker levels. We celebrate the linguistic and cultural diversity among our pupils and believe in supplementing versatile lessons with extracurricular activities, workshops and intensive training days. Our study trips to destinations including Paris, Madrid and Salamanca are also popular, as are celebrations organised by Ellesmere College staff and pupils such the annual Chinese Spring Festival which are open to all.

In short, we wholeheartedly believe in the benefits of foreign language acquisition, a belief that has put us ahead of the curve. The advantages for business, travel and cultural intelligence are obvious but there are also the cognitive benefits of language acquisition, along with the sheer fun of learning something new. Language study also enhances communication skills, valued in many careers that Ellesmerians aspire to, and practised by our pupils in ESB examinations, House debating competitions and Model United Nations events.

Image: Edward suitably engaged in the study of the intricacies of the Spanish language!