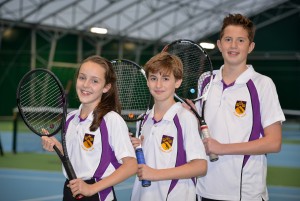 Budding young tennis players have qualified for the regional finals of the British Schools Under 12 and Under 13 competition.

Lili, 12, said "I am really excited about playing in the regional finals and I hope it's going to be a great experience for all of the team".

In recent performances, both the girls and boys teams have won the Shropshire County Competition, where they remained undefeated, and the road to the British Schools finals saw a number of impressive performances against Newcastle-under-Lyme school, 6 - 0, Hereford Cathedral School, 6 - 0, and Ysgol Maes Garmon and Castell Alun High Schools 4 - 2.

Stephen Welti, Director of Tennis said "I couldn't be more proud of how the pupils have performed. The great strength of competition is that it is a team event and players have worked hard together to achieve success. You never know what will happen in the finals but if we were to get through to the national finals in December that would be a great achievement".