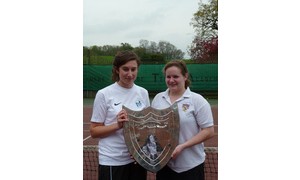 This competition has been running for over 100 years and the School regularly enters teams to compete. This year’s winning pair, Sixth Form students, Joanne Bowen and Hannah Clarke, proudly returned to school with the magnificent trophy which now resides with the many others won by Joanne and Hannah since their arrival at the School in Year 7 as Tennis Academy Scholars. Whilst as a School Prefect and Tennis Captain, Joanne in her final year at the School and will be leaving after her A levels next month, Hannah Clarke, a Year 12 International Baccalaureate student, will be able to compete again next year.

Nikki Hoy, Tennis Academy Director commented, ‘ Winning  the 2012 Tournament was particularly rewarding for Hannah and Joanne as this in the second time they have achieved  this, winning in 2008 and their time playing together for the School will come to an end when Joanne leaves the School this summer. Catriona and Chelsea also played well against many much older pairs and obviously have years ahead to win this prestigious Midlands competition’.