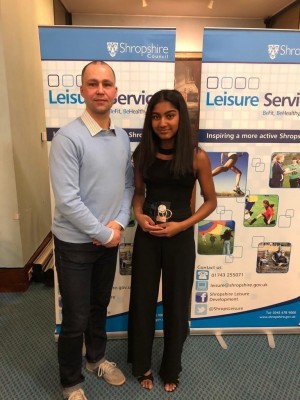 A rising tennis star from Ellesmere College has been awarded a prestigious accolade marking her outstanding sporting achievements.

Aditi Chezhian, a member of the Ellesmere College Tennis Academy, is already an established part of the Welsh National Junior Squad with a list of impressive performances to her name.

She received the Shropshire Schools Sports and Athletics Association 'John Beswick International Award' at a presentation evening held at the Shirehall in Shrewsbury after being nominated by Stephen Welti, Senior Performance Coach and Director of Tennis at the Ellesmere Academy.

"Aditi has made exceptional progress, she has a tremendous work ethic and is a very talented tennis player with high hopes for the future. I didn't hesitate to nominate her for the award and was delighted when she won it," he said. As a World Academy of Sport (WAoS) accredited educational facility (AFEC), our Tennis Academy is one of the top centres for young players in the country and we have developed a strong pool of talent which is maintaining Ellesmere College's highly respected reputation in the sports arena."

Aditi said: "It was a nice surprise when I heard about the award. I'm really thankful to the coaches and the school, and really excited to see what tennis holds for my future."

Aditi's mother, Sheila Chezhian added: "We are proud of Aditi's achievements. We moved to Ellesmere primarily for the tennis, and I think that is one of the best decisions we made. The Tennis Academy provides an all round programme including individual training and squads, fitness, mental training, physio and nutrition education, which has really helped her progress."

In October the Year 10 student helped Team Wales retain the Junior Home Nations Tennis Championship - the first time Wales successfully defended the title in the competition's history - winning praise from the Welsh coach who said she was the most improved player of 2019.

Earlier last year she was part of the successful Ellesmere College Year Seven and Eight team which reached their highest ever place in the national finals of the Lawn Tennis Association Senior Students Competition when they were named third best team in the country.

The 'John Beswick International Awards', held earlier this month, recognise talented youngsters who have represented their country at sport during the preceding year and who attend an affiliated school or college in Shropshire.