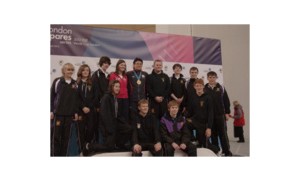 The School’s Senior Shooting Coach, Tom Rylands, was offered the opportunity to take a party of Senior School shooters to the  London 2012 Olympic Shooting venue at Woolwich, to watch some of the World Cup which was being run as a test event for the Olympics.

Pupils one of only two schools in the Country to be given the opportunity to meet Olympic Competitors and even stood on the podium with the world No1 and Gold medal winner for 50 Metre Pistol!

Whilst at the prestigious Shooting venue, pupils were introduced to the World No 2 Prone Rifle Shooter, Eric Uptagraft, from the USA who will be shooting in the Olympics in August. To the delight of the group, he spent an hour answering questions about shooting, and winning, at Olympic level.

During the visit, there was the opportunity, also, to catch up with GB Olympic Team member and Old Ellesmerian, Jenny Corish, who was competing for Great Britain in the Women’s 3P event, and to watch her shoot a personal best to qualify for the next round of that competition.

Tom Rylands explained, ‘This interesting visit was made possible through the invitation of Eley Ltd, the British company this is the worldwide leading manufacturer of ammunition. It was very memorable for everyone and was particularly pleasing to witness a former pupil shoot competitively during the day’.

He added, ‘With more open competitions for the Academy’s shooters’ this term  and with, hopefully, the first Ellesmere team to compete in 20 years at the  forthcoming Ashburton Trophy at Bisley, the forthcoming premier Schools’ competition that was inaugurated in 1861, the School’s Shooting is flourishing’.