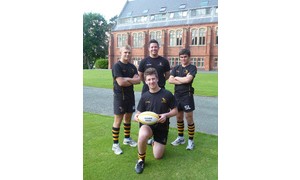 A group of talented Year 10 Rugby players at the School have recently been impressing regional rugby selectors.

Six boys were initially selected to play for the Welsh Exiles Under 15 Rugby side and recently took part in a trial based tournament. Have played particularly well, Mike Adams , Harry Cross and Scott Leckie were singled out from the Welsh  Exiles’ performances and were invited to join the Under 15 North Wales squad. To the further delight of Harry and Mike, they were also both subsequently selected to train with the North Midlands squad.

Alex Murphy, Director of Rugby explained, ‘We clearly have a young talented crop of players at Under 15 level. Their skills have certainly developed following this Summer term’s specialist training that they have been receiving on a daily basis. Now, all they have to do is select which route they would like to go down!”

To gain an insight into some of the work that the School have been doing to further develop rugby talent, families of Rugby players aged between 12 and 16 years are invited to a Rugby workshop that is being held at the School on Sunday 8th of July between 2pm and 4pm. Alex Murphy added, ‘The workshop will focus particularly on Rugby agility’.