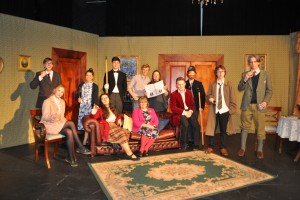 Today saw the departure of a group of our Yr 9-13 Drama students to the Tabor Academy in Massachusetts for part of the Easter break, following the successful visit of the Academy here and their production of 'Lucky Me' - written, produced and acted solely by the students from the Academy.

The exchange with Tabor Academy has been a long established exchange event that occurs once every two years and both schools have benefitted hugely from the relationship. Each of the schools produces a play that they perform in their home country, and then bring it over to the exchange school - ready to perform in front of audiences at a number of schools.

After flying over and performing in Dublin, the Tabor students came to Ellesmere and spent several days visiting the local area, getting to know staff and students here and performing their production locally. The students and their teachers were quickly assimilated into experiencing life in an English boarding school and a packed audience in the Arts Centre Theatre were able to enjoy their student-devised play 'Lucky Me', which explored the concept of luck through a range of scenes and monologues, some moving and others comic.

After a brief visit to London, they returned home to prepare for the Ellesmere students to travel over for the return visit and take their own production 'Murdered to Death' on tour!

'Murdered to Death' - a classically comic spoof of the Agatha Christie 'who dunnit' style play - was produced and acted by the Yr 9-13 student drama group and performed to two packed theatre audiences at the College before taking it on tour. 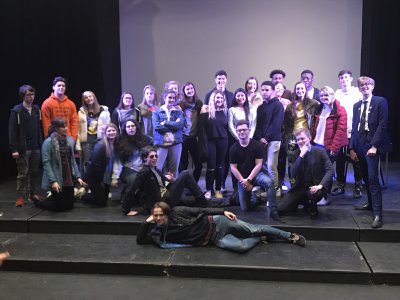