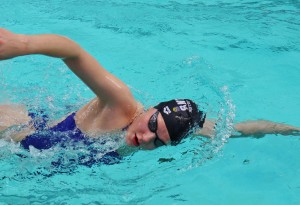 The Ellesmere College Swimming Academy were in fine forma at the recent British Swimming Championships - please find the full report below:

Heats- Emily Farr and Jake Hutchinson kicked off the Ellesmere College Swimming Academy's participation in the event with solid swims in the 50m Breaststroke and Backstroke in personal best times respectively. Amelia Brian competed in the 200m Freestyle, taking the race out quick to finish in a time just outside of her PB. A trio of academy athletes competed in the 400m Freestyle, all making significant drops on their previous PB times. George Smith knocked seven seconds from his PB time to progress to the Men's B final, whilst teammates Isaac Dodds and Andrew Bertoli knocked ten and three seconds from their PB's to progress to the Priority Paris and Junior finals. Both Anna Farrow and Eleanor Broughton stepped up to the occasion with strong 400m Individual Medley swims, resulting in both progressing to the Junior final in six and four second PB's. Fleur Lewis also competed in the 400m Individual Medley and progressed to the Priority Paris final. Issac Hall competed in the 100m Breastroke to complete day one's heat swims in a new personal best time.

Finals- Emily Farr started the academy's involvement as we would carry on for the day one finals, knocking another couple of tenths off her PB, resulting in a second place finish in the Priority Paris final. Andrew Bertoli powered his way to the finish in his Junior 400m Freestyle, to knock a further two seconds from his PB time he set in the heats to win. Isaac Dodds and George Smith also set personal best times in their Priority Paris and Men's B finals, finishing in third and eighth in their events. Anna Farrow and Eleanor Broughton, competing in their first British Championships finished in fifth and seventh in their Junior 400m Individual Medley final.

Heats- Anna Farrow and Olivia Hunter started proceedings on day two competing in the 50m Butterfly, with Farrow getting a good PB in 28.62 seconds and spotting the wall at the finish brilliantly. Andrew Bertoli knocked four seconds off his 200m Butterfly PB to go into the Men's B final as the fastest junior, whilst teammate Isaac Dodds followed up his strong performance in the 400m Freestyle yesterday with another huge PB in the same event. Both Jake Hutchinson and Oscar Dodds put in strong performances in the 100m Backstroke in PB times, with Hutchinson progressing to the Junior final after an impressive third 25m section of the race. Emily Farr would continue her impressive form from yesterday by knocking over two seconds from her PB in the 200m Breaststroke, not afraid to take the race out strong over the first 100m. Amelia Brian and Holly Lamb started their programmes with solid swims in the 800m Freestyle, taking the race out strongly and swimming tough in the second half of the swim.

Finals- Fleur Lewis would set the tone for her teammates to follow, as she finished second overall in the 800m Freestyle final heat in a new PB time, negative splitting the race and making her way through the field strongly in the closing stages. Both Isaac Dodds and Andrew Bertoli would step up to the big occasion once again, with superb 200m Butterfly finals swims, dropping a further second off their previous PB's set in the heats. Jake Hutchinson made his finals debut with an eighth place finish in the 100m Junior Backstroke final.

Heats- George Smith (above) put together a very strong heat swim in the 400m Individual Medley, knocking four seconds off his PB and progressing to the Men's B final. Teammates Andrew Bertoli and Isaac Dodds progressed to the Priority Paris final in the same event, "swimming tough" despite dealing with fatigue from the 200m Butterfly finals the night before. Oscar Dodds also progressed to the Junior final in a new two second PB. Fleur Lewis swam in the heats of the 200m Butterfly and captured a place in the Women's B final, following on from her success in the 800m Freestyle the night before. Olivia Hunter also competed in the 200m Butterfly, finishing her race strong in the final 50m. Jake Hutchinson would also get a good PB in his 100m Freestyle, utilising his "easy speed" during the first 25m which laid the foundations for a very good all-round swim. British Swimming Championship debutants James Raw and Archie Neaves put in gutsy performances in the 1500m Freestyle, gaining invaluable experience to take going forward.

Finals- Oscar Dodds would be undeterred by the occasion as he took out the Junior 400m IM final out strong in the first 200m, before finishing in just under a three second PB time. Andrew Bertoli and Isaac Dodds would once again step up, as they finished second and third in their Priority Paris final, both attaining five second PB times! George Smith would once again PB in the Men's B final with a commanding second half of the race, coming back impressively under a minute for the final 100m Freestyle leg for a third place finish. Fleur Lewis would finish seventh in the Women's B final of the 200m Butterfly, improving her time from the heats and finishing the race strongly in the final 50m.

Heats- Anna Farrow was just outside of her PB in the 200m Backstroke, although it was a very well controlled swim that was paced well. Jake Hutchinson once again utilised his "easy speed" in the initial phase of the race to knock another second from his PB time in the 100m Butterfly. George Smith would get himself a place into the Men's A final in the 200m Breaststroke, building the effort throughout the race. Isaac Hall would take a second off his PB time to gain a place in the Junior final later in the day.

Finals- George Smith would have to wait until the end of the session for his Men's A 200m Breaststroke final. A very well controlled swim pacing-wise led to Smith getting a fifth placed finish and in a new PB time, competing in the final against world-class competition as Olympic medalist James Wilby took the title. Issac Hall also embraced the big stage by finishing third in the Junior final, taking a further two seconds off his PB from the heats!

Heats- Day five started with Jake Hutchinson competing in the 50m Freestyle and gaining a new PB time in 24.43 seconds. Fleur Lewis continued with her programme of events by gaining a place in the 400m Freestyle Priority Paris final, whilst Amelia Brian put together a metronomic swim in her 400m Freestyle for a solid PB, just missing the Junior final. George Smith would once again qualify for a Men's A final, this time in the 200m Individual Medley with a particularly strong Breaststroke leg. Isaac Dodds would continue his fine form by once again getting a PB in the same event, landing him a Priority Paris final spot. Oscar Dodds would also knock another two seconds from his PB in the 200m Individual Medley, his Backstroke leg being particularly fast and a sign of things to come for the final day of racing. Anna Farrow would capitalise on her "easy speed" from her Butterfly leg by gaining a spot in the 200m Individual Medley Junior final, with a noticeable improvement in her Breaststroke efficiency and distance per stroke. Concluding the heats would be Andrew Bertoli in the 800m Freestyle in a new PB time, whilst Oscar Dodds also competed in the same event.

Finals- Fleur Lewis would begin the academy's involvement in day five's finals session with a win in the Priority Paris 400m Freestyle final, working the second 200m and building the effort throughout. Isaac Dodds claimed another PB in the Priority Paris 200m Individual Medley final by winning the event, taking the race out strong and holding onto the lead virtually the entire way. George Smith would also improve slightly on his morning swim by finishing in eighth place in the Men's A final, again competing against world class competition with the likes of Olympic champions Duncan Scott and Tom Dean. Anna Farrow would significantly improve her Freestyle leg in the 200m Individual Medley Junior final, finishing in third place with a new PB time. 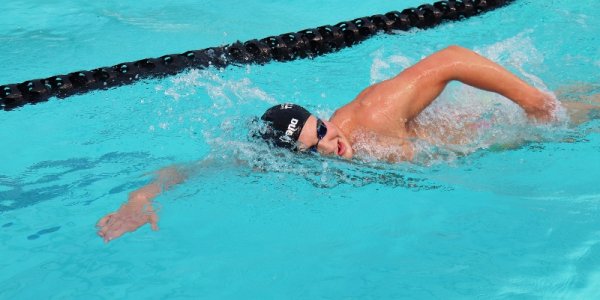 Heats- Jake Hutchinson (above) would start the day in style with a fantastic 50m Butterfly, spotting the finish superbly to finish in a time of 25.59 seconds. Emily Farr continued her great form by getting a place in the Priority Paris final, knocking a second off her previous PB time. The two Dodds' brothers would both gain finals spots for the 200m Backstroke, Isaac getting into the Junior final whilst Oscar would secure a Priority Paris place in a new PB time. Olivia Hunter swam a solid 100m Butterfly, working the third 25m to match her PB time. Jake Hutchinson would stake his claim for a European Youth Olympic Festival spot with a commanding 200m Freestyle in an outstanding four second PB, qualifying fastest into the evening's Junior final. Holly Lamb and Amelia Brian would conclude the last heats session with solid swims in the 1500m Freestyle, maintaining a consistent pace throughout to be just outside of PB's.

Finals- In an exciting 1500m Freestyle final heat swim, Fleur Lewis would put on a clutch performance to haul in her City of Sheffield rival to claim her maiden British title! A tactical masterclass ensured that Lewis reduced the ten second deficit at the half-way point progressively in the second 750m, both being level at the 1450m stage before Lewis powered away in the last 50m to win by nearly three seconds. Emily Farr embraced the big occasion with a new PB time in the Priority Paris 100m Breaststroke final, finishing fifth and getting into the 1.12's for the first time long course. Isaac Dodds would finish the meet strongly in a new 200m Backstroke PB, finishing second in the Junior final whilst sibling Oscar would finish third in the Priority Paris final- also making a claim for a European Youth Olympic Festival spot. Jake Hutchinson would finish seventh in the 200m Freestyle Junior final, concluding a very strong meet for the academy.

We would like to once again thank everybody involved in the success of the British Swimming Championships. We look forward to seeing how the rest of the season unfolds, with plenty still to swim for and the potential for some of our athletes making International teams for the summer!