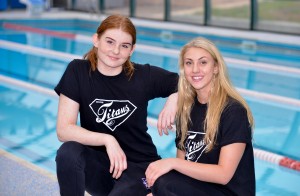 Ellesmere College swimmers Freya Anderson and Cassie Wild have been selected to represent England and Scotland at April's Commonwealth Games in Australia.

Anderson was promoted to the senior British swimming team for the World Championships after winning her debut British title this year. She also became World Junior champion in the 100m freestyle. Olympic champion Adam Peaty is the headline name in the party, although further swimmers will be selected following December's trials.

Wild, who currently holds 100 metre backstroke and Scottish junior records will continue her success in the pool from this summer's World Junior Championships in Indianapolis by joining up with the Scottish squad to swim alongside Ross Murdoch and Hannah Miley. While Duncan Scott - just 17 when he won silver with the 4 x 200m Freestyle Relay team in Glasgow - will be looking to build on his medal success at the 2016 Rio Olympics and the 2017 World Championships.

Titans swimming Coach Alan Bircher said, "I've come to expect the unexpected when it comes to this group of amazing swimmers. I always look for a team that work together rather than being dictated too and these rewards just show us that the partnership and bond between the coach and swimmer is at an all-time high. I could not be prouder of what every single swimmer has achieved already this season.".