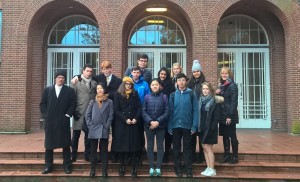 Accompanied by Teacher of Physics, Dale Crawford, and Head of Modern Foreign Languages, Christina Westwood, Ellesmere College's attendance at this prestigious event is now into its eighth year. Students represented countries as diverse as El Salvador, Iran, South Sudan and Venezuela across all committees, debating a variety of challenging global and contemporary issues with delegates from The Netherlands, Germany, Sweden, Nepal and Egypt.

The Ellesmere delegation was enhanced by Old Ellesmerian, Ethan Warren, currently studying International Relations in the Netherlands, who assisted in the Approval Panel. Particularly noteworthy were Luke Harris's role as ambassador of our delegation and Tapaswini Varshneya's promotion to Deputy Chair of the North Atlantic Council.

Preparations are already underway for attendance at the 2017 conference and Sixth Formers with an interest in global matters, conflict resolution and debating in an international forum are warmly encouraged to talk to either teacher for more information about next year's event.