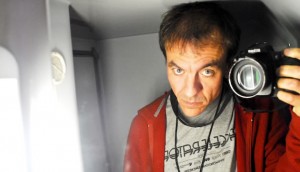 Ahead of his 'A Life In: Photography' talk, Pat Graham visited Ellesmere College to present a workshop to a number of Yr 12 Media Studies students keen to learn how Pat creates his iconic images and practical advice on creating that 'perfect shot' for their Advanced Portfolio A Level projects.

The group of media students heard about Pat's life and how he went from receiving his first camera as a child, to photographing world famous bands such as Chase And Status and boxer David Hayes. He then took them through a practical workshop with their own cameras focusing on lighting, angles and composition on the Schultz Organ in Big School Hall.

Pat is a US born rock, pop and punk band photographer who moved to London in 2000 and established the non-profit gallery '96 Gillespie' in a converted post office with a vision to "...establish dialogue between US and UK artists." In 2007 Pat published his first book of works 'Silent Pictures' and in 2011 he published 'Instrument' - documenting musicians and their instruments and the stories behind what they mean to them - for which he won best cover of the year 2011 by Amazon. In 2014 he published his third book of works documenting touring with the band 'Modest Mouse 1992-2010'.

Pat has gained worldwide recognition for his powerful ability to tell stories through impactful and at times honest and gritty imagery - working with iconic brands and publications such as NME, Rolling Stone, PokerStars, Umbro and Apple for brand campaigns and publicity shoots. He has also been given exclusive access to some of the world's most famous sports and music stars, teams - including the England Football team, and events - capturing moments in time with his signature style. His work has taken him all over the world, most notably detailing touring with the band Modest Mouse in the US.

Jaimie Wakefield, Yr 13 who has been accepted to attend RADA in September, said of the workshop, "It was fascinating meeting Pat and hearing about his life and sharing his experiences. I'm really passionate about photography and learnt a lot during the workshop - these are skills that will take me forward to studies at RADA."

Join us for the evening on June 12th from 7:00pm in the Arts Centre, Ellesmere College:

'A Life In: Photography - with Pat Graham'