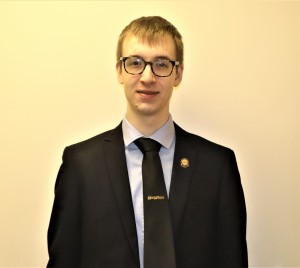 Congratulations to Harry Griffiths (Year 13) whose short story, 'From the Street', was Highly Commended by the judges of the National Flash Fiction Youth Competition 2018. Students from across the UK were invited to submit flash fiction and Harry's melancholy story, depicting fear and anxiety, was recognised as one of the top entries received this year.

The annual competition, founded in 2013, is organized by the Department of English at the University of Chester and the International Flash Fiction Association (IFFA). The winning story is published in Flash: The International Short-Short Story Magazine.

From the Street by Harry Griffiths

She sat, huddled in the darkest corner of her room, muffling her breaths. She tightened her grip on the pistol. Suddenly the trees outside her window tapped maliciously on the glass, making her heart race faster. The sticky smell of varnish stuck in the air, choking her. This was a new fear she felt. Not like the one in her nightmares. This was real. It was thick and strong.

The last of the light faded as the sun finally set. She knew it was coming. She had seen it staring up at her from the street, every night, since her partner had left two weeks ago. He said he wouldn't be back for another month and had assured that it was going to be okay.

"If you're that worried, I'll call the police. I'm sure the neighbours have noticed it too" he encouraged her unsuccessfully.

The hallway lights were on outside her bedroom as usual. She didn't feel safe without them recently. But tonight something was different. The man wasn't there like usual. She thought she heard strange noises coming from downstairs.

Footsteps. Loud. The floorboards creaked under each step, screaming from the pressure. They started coming up the stairs, slowly at first but gaining momentum. It wouldn't be long before they reached her door.

The feet stopped at the bedroom door, like they knew where she was. The shape behind the wooden frame cast a shadow, revealing where it was standing. She too stood up then, gun stretched out in front of her. Aiming down the sight, she waited to pull the trigger.

The handle twisted downward. Light burst into the room, blinding her momentarily. She fired. The sound was blinding.

Her shoulder was aching from the recoil. Her sight was finally adjusting to the hallway light. Bags hit the floor. Her partner's knees hit the wooden floor first, followed quickly by his body. A yellow glow from the street lamps cast his blood orange on the bed sheets.