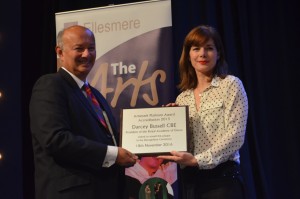 It's a busy Blackpool weekend for former ballerina Darcey Bussell. But she found time en-route to the Tower Ballroom to pop into a Shropshire school, to meet students and unveil a plaque.

Strictly judge and dancer Darcey Bussell presented an ArtsMark award to Ellesmere College. The 47-year-old, who this weekend was taking her strictly seat with the judges, paid a visit to the school as part of its celebrations for winning a prestigious ArtsMark platinum award.

She used the occasion to call for an end to cuts to the arts in Britain, saying it was vital to instil discipline and passion in young people.

Ms Bussell won over more young fans and defended the arts during the visit. The college has become the first independent school in England and the only one in Shropshire to win the ArtsMark platinum award for providing children and the community with arts and cultural experiences.

She was shown around by arts centre prefect Poppy Clarke, from Market Drayton, who has been dancing since she was two and was thrilled to meet her heroine. Another dancer introduced to Ms Bussell was 15-year-old Lynx Noumey, a six-foot tall rugby player who is equally at home on the dance floor as part of the Midlands-based contemporary dance group, Flexus, as he is on the sports field.

One of Britain's best known ballet dancers, Miss Bussell praised the college for its work and told students that without the arts in their lives the world would be a very boring place. "Today there are so many jobs out there if you want to go down the arts route," she said. "The discipline and the passion arts gives can help in all fields of life."

Ms Bussell said she was concerned that at a time of economic slump the arts could suffer. "It is the arts that always suffers first in funding cuts. However, Britain is doing a lot better than it used to. We are now almost as passionate as the French for the arts. The BBC does a great job in bringing the arts into our lives."

Keen to concentrate on the college and its success, Ms Bussell did not want to talk Strictly, which has again been a ratings winner for the BBC thanks in large part to the antics of former shadow chancellor Ed Balls. However she did admit she was looking forward to going to Blackpool, adding: "For the professional dancers in particular Blackpool is the home of ballroom"

Poppy, 17, said: "She really is a role model for all dancers. Strictly is something that people of all generations can watch. I love it and I know the boarders watch it in college."

Head of Ellesmere College, Mr Brendan Wignall, said: "It's really important that all of the hard work from staff and pupils is recognised. A school that just focuses on the academic side is only half a school. We already have a reputation for our sports prowess and we have felt for some time now that Ellesmere's provision across all the arts - dance, drama, music, creative writing, and visual art - has been of the very highest quality. To have this affirmed by Arts Council England is a very proud moment for the college."