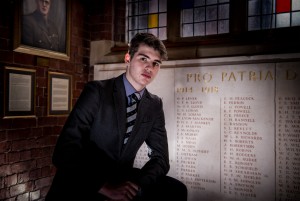 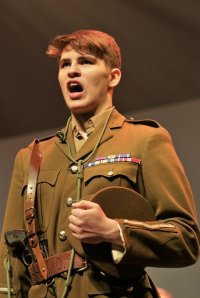 Cast and crew of 'Poppyfields - The Musical' were overwhelmed by the reaction they received when their original WW1 production premiered last week at Theatre Severn. Year 12 pupil, Ollie Williams, took the starring lead role as 'Tommy Gunn', a conscientious objector embroiled in a love story between the classes, before a moving finale on the trenches.

The final three performances had audiences on their feet in standing ovation, with many reduced to tears. The production has an abundance of 5-star reviews on Facebook with calls for the show to go on tour. This has prompted the show's production team to announce a return to Theatre Severn in September for four final performance dates: September 13th, 14th and 15th.

Former Shropshire head teacher, John Howard, spent the last eight years writing the brand-new show as a contribution to the centennial commemorations of the ending of The Great War in 1918. It is to help youngsters of today remember the sacrifices made by their young counterparts during World War One. The show is based on the lives and loves of a group of young people living on the Home Front on the Welsh Borderlands. It explores the stresses and hardship experienced during the six months leading up to opening salvo of the Battle of the Somme on July 1st 1916. 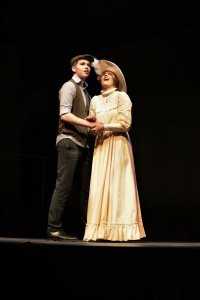 John Howard said, "The story of these young people's lives presents a fast-moving, often humorous, and historically accurate script, that plays on and evokes a range of emotions. The fortunes of the young men are played out against a backdrop of the World War, culminating in a very respectful and moving Finale of Remembrance. The project is firmly aimed at inspiring the youth of today to seek out the incredible stories of their forebears, played out 100 years ago."

John is now aiming to encourage schools across the country to take up the musical and perform it as part of their WW1 curriculum studies.

For your last chance to see Ollie in action, tickets for the final four performances this September at Theatre Severn can be bought by clicking here https://www.theatresevern.co.uk/shows/whatson/poppyfields-sep/ or calling the Box Office on 01743 281281.