Songwriters to the Stars visit Ellesmere 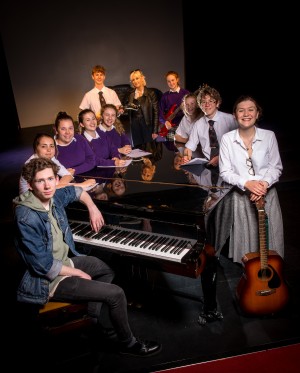 Songwriters Cleo Tighe and Danny Casio took time out from creating well-known hits for the likes of Jess Glynn and writing sessions with many well known artists of today to visit musicians at the school. Students were treated to a glimpse inside the complicated world of commercial music with a day's songwriting and practical performances. Students were also able to observe and explore the process of creating a piece of music during an evening performance.

Cleo and Danny are part of a group called 'The Six' and their talents for creating some of the charts top hits have seen them rewarded with a platinum disc for the song 'Real Love' by Clean Bandit and a platinum album disc for Jess Glynne. The group also received a number 1 gold album disc for Rudimental.

"At this moment, The Six are known for writing a few big songs for popular artists so naturally we are recommended within the industry. The pull for artists to come and work with us is a combination of the environment we create and the fact that there are five of us, which means we can all contribute different ideas to a piece of music". Danny says

Other notable credits include Gorgon City, Reggie 'N' Bollie from The X Factor as well as working with top producers in various writing sessions who have worked with Ellie Goulding, Little Mix, Rihanna, Zayn Malik, Sam Smith, Emile Sande and Naughty Boy to name a few.

Director of Music Tony Coupe said, "We want our students to explore a range of musical styles and opportunities from song writing, production and performance, so that when they head off into the world they have a wealth of experience and knowledge that they can all upon".

The group have also just signed a record deal with Parlophone Records and are currently busy writing material ready to launch as a band later this year.

Cleo said, "It was interesting working with the students and it was nice to step away from writing for a day and show others how it is done. In some ways, it made me appreciate music more. The kids were really enthusiastic, which made it a positive experience for both of us".