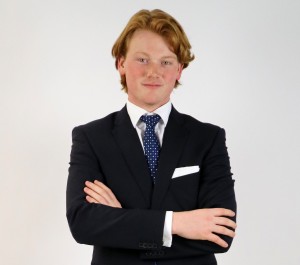 A former Ellesmere College student has given 'fair warning' to his rivals that he is going to be a 'lot' to be reckoned with in the world of auctioneering after making the final of a prestigious competition.

Old Ellesmerian Jack Austerberry, 19, is the youngest specialist at Shropshire's Halls Fine Art Auctioneers and Valuers and took to the rostrum as one of the finalists in this year's NAVA Propertymark Novice Auctioneer of the Year held at the Chateau Impney Hotel in Droitwich.

He was one of nine finalists in the competition open to auctioneers who must have taken their first auction after 31 September last year or been on the rostrum for four auctions or less. When the gavel fell, the winner of the event was announced as David Henwood of Clive Emson Auctioneers.

Jack found his passion for horology while completing his A Levels at Ellesmere College - demonstrating his flair for entrepreneurship early on. He built and sold antique watches while studying and decided to focus on a career specialising in timepieces with Halls when he turned 18, making him one of the youngest specialists in the industry.

Jack's profile on the Halls website describes him as the head of watches, adding: "Having joined us in November 2018 at just 18, he is the youngest specialist we have but don't let his age lead you to think he is lacking in the necessary knowledge."

Maryanne Lineker-Mobberley of Halls' Fine Art Department said: "Jack's been showing great promise since joining us straight after school as a junior watch specialist. He's curated two Halls watch auctions already which included the sale of a 1969 Cartier Tank in 18ct gold which went under the hammer for £11,000 and a 1968 Omega Speedmaster which fetched £3,200."

Jack said: "I was delighted to make it through to the final stages of the competition, it was a great experience. I have learnt so much since joining Halls and look forward to making further appearances on the rostrum - it's an amazing feeling."

The final also acted as a fundraiser with £1,700 being raised for Centrepoint - a charity which helps to combat homelessness.

NAVA Propertymark Novice Auctioneer of the Year is aimed at all auctioneers and valuers starting out on their careers in the profession. The finalists are involved in a bidding sequence arranged to demonstrate saleroom occurrences and to test their knowledge, skill and presence on the rostrum.