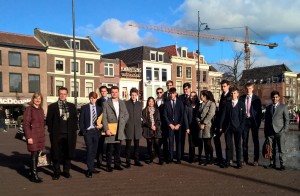 A delegation of fifteen sixth form students returned from their annual participation of the Leiden Model United Nations conference. Students joined more than four hundred other delegates from countries including the Netherlands, Greece, and Nepal. Among many of the highlights, our delegate for China, Luke Parker, emerged as one of the chief policymakers in the Security Council. Harry Griffiths was voted third best delegate in the United Nations Environment Programme, and Pratham Manchanda fulfilled a dual role as delegate for China and Albania.

The conference concluded with a visit of the historical and architectural sites of interest in Amsterdam. Delegate for China in the World Health Assembly and upper sixth student Edward Latham said "Having elected to study sciences at A level, this conference was a wonderful opportunity to engage in my interest of global and cultural affairs and to experience something a little different".