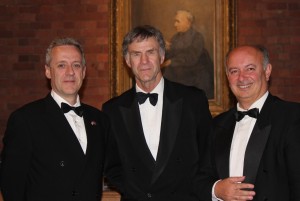 As the culmination of an alumni weekend held at the School, a dinner dance attended by parents, staff and Old Ellesmerians was held. The guest of honour and after dinner speaker was Sir Ranulph Fiennes, a current parent at the College and considered to be the world’s greatest living explorer.

Nick Pettingale, Director of Development, who hosted the event explained ’Sir Ranulph had no mobile phone signal and turned up at the wrong entrance only to find it locked. However, being the type of man that he is, having climbed Everest three times and run seven marathons on seven continents in seven consecutive days, he simply climbed the main gates and found his way to the dinner, much to his and our amusement.’

‘He spoke of his life packed with adventure and many remarkable achievements, the audience were captivated and amused and sometimes slightly horrified as Sir Ranulph showed in graphic detail the physical price he has paid to be the ‘first’ in some of the earth’s most dangerous and hostile environments.’

Afterwards Sir Ranulph signed and personalised copies of his book and chatted to guests at the end of the evening.

Old Ellesmerians had travelled from as far away as Japan, the South of France and the States to be part of the weekend. One such guest was Richard Godwin, who works in the private space industry for the Dragon X project, seen here with Sir Ranulph and the Headmaster, Brendan Wignall; both Richard and Sir Ranulph provoked the audience to pick up the pioneering baton and press to be ‘first’ wherever we could.

The evening was also part of an ongoing series of talks and lectures at the College which last month included Matthew Syed, The Times’ award winning sports journalist.