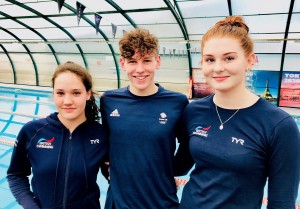 British Swimming has announced its team to represent Great Britain at the 2018 European Junior Swimming Championships being held in Helsinki and taking place 4th - 8th July. 52 countries participate in the annual championships; an event in which British Swimming has historically enjoyed significant podium success and is now lying in 8th place in the all-time medal table.

Freya, Charlie and Angharad are all experienced internationals and looking forward to playing their part in the GB team. In doing so they will be following in the lanes of their team mates Phoebe Griffiths and Ellinor Southward who both competed in last year's championships in Israel.