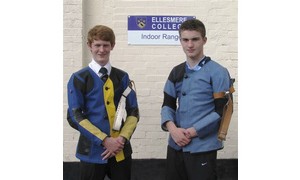 Two members of the Ellesmere College Shooting Academy, Year 10 pupil, Richard Lay, and James Slater in Year 11 won the Junior Pairs match at the Bromyard event. The pair then travelled recently to Luxembourg with the Welsh Team to compete in the 4 Nations Cup. This was a first representative trip for James and he excelled, winning Gold in the Junior Men’s prone event, with Richard winning Bronze. Tom Rylands, Shooting Academy Coach commented, This was a fantastic result for them both and for the Welsh team. The College works closely with the Welsh squad to encourage and promote potential shooting talent and give opportunity for up and coming marksmen and women’.

The CCF Shooting team,  on its first outing to a competition in some 20 years, also travelled recently to Kingsbury for the 143 Brigade’s Target Rifle Championships. Shooting at 300 and 500 yards out, they shot against 14 other teams from Hereford, Shropshire, Worcestershire and Warwickshire, including Malvern College and Denstone College, to finish a very creditable 2nd overall, with Cadet Ben Williamson in Year 10 gaining 3rd place in the individual scores.

After an absence of 23 years, the College CCF team will travel to Bisley this July to compete in the Ashburton Shield, the premier UK schools’ competition. Tom Rylands, the Shooting Academy Senior Coach explained, ‘This will be valuable experience for what is essentially a very young and inexperienced team, but very enthusiastic for all that! The Duke of Westminster is presenting the prizes this year, and the team hope they will get the opportunity to meet him on the podium!’

This completes an amazing year for the Ellesmere College Shooting Academy and Shooting Club, with many successes at every level, from School competition to International level. During the forthcoming Summer holidays the biggest ever squad of 25 shooters will travel to Bisley in August to compete in the Junior National Championships.