Shannon sets her Sights on Gold 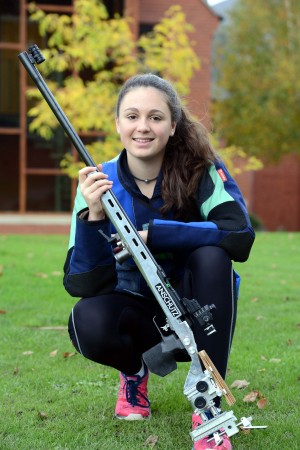 Old Ellesmerian, Shannon Davies, has been chosen by British Shooting to represent Great Britain in the Junior World Cup this July in Suhl, Germany.

Shannon will shoot .22 rifle in prone and is really looking forward to representing her country. This is the first of three competitions athletes aspire to: the World Cup, the Commonwealth Games and of course the Olympics - so for her in her first year at university this is a massive achievement.

Shannon left Ellesmere last year after seven years at the College, and is now studying for her degree in Physiotherapy at York St John's University. During her time at Ellesmere College she was a very active member of the Shooting Academy with successes at all levels for the College, as well as The British Schools Squad - Captain of Shooting - and of course a member of the winning Ashburton Cup team in 2015.

Shannon is looking forward to returning to Ellesmere College in June to help coach and support Shooting Academy members as well as younger shooters who are enjoying taking part in such an inclusive sport.

Congratulations from us all at Ellesmere Shannon and good luck in July!