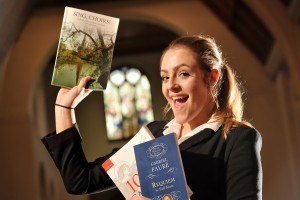 Seren Devismes, 16, has beaten off stiff competition from 300 students to land a place in the national finals of the Woodard Schools Musician of the Year competition. Only 30 candidates were selected for the final of the competition, which will be held at the Elgar Concert Hall in Birmingham where brother of Andrew Lloyd-Webber, Julian, will be adjudicating the competition.

Seren who is set to head down to Birmingham on May 5th, has chosen to perform 'piangero la sorte mia' from the opera Giulio Cesare by Handel, in the senior category, which ranges from 15 to 18 years-old. She said: "I entered the competition, mainly as a slight test, to see whether all the effort that my teachers were putting into me, was worth it. My aim was to get through the first round and my dream was to sing piangero la sorte mia, which meant I would have to get to the final."

Her participation in the competition tops off an impressive year for Seren who had also received individual honours at the Oswestry Youth Music Festival, winning the vocal solo test piece. Tony Coupe, director of music at the school, said: "I am delighted by the scope of talent we have at the school and to see Seren at the Young Musician of the Year competition is inspiring. "We are all committed to encouraging young talent and aim to offer them every opportunity to excel."

Founded in 1847, Woodard Schools form the largest group of independent Church of England schools in England and Wales. Meanwhile, families are being invited to an open day at Ellesmere College on May 21, between 1pm and 4pm.