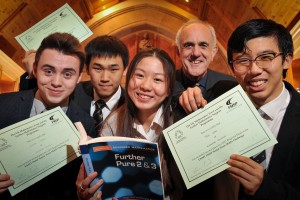 Ellesmere College students were celebrating after incredible recognition at the British Maths Olympiad. The aim of this is to test skills, often beyond the level of Further Maths. Six of our students took their place in the Senior Maths Challenge, which is open to all students in Years 12 and 13. Victor Zhao, Year 13, impressed all by scoring full marks and was invited to take part in the Kangaroo stage along with fellow students Wayne Wang and Jack Gan. This stage is only open to the top 25% of candidates.

Victor said, "I did not think about the outcome, but focused on the need to complete the test with as few mistakes as possible. The time and effort spent in the classroom and the support of Mrs Bogue and the rest of the Maths team at Ellesmere has been instrumental in helping me get to this point."

Susan Bogue, teacher of Maths at Ellesmere, said, "In September I took Victor, Wayne, Jack and Charlie to a presentation at the Science Museum in London which awarded some of the top Maths students in the UK, and the event really inspired them. It was this academic enrichment activity which really enabled them all to see what they could do with the Senior Maths Challenge and encouraged them to represent their school, putting themselves against the very best in the UK."

Previously, the College have succeeded in the team challenge, where a team of four Ellesmere students finished 2nd in the regional semi-finals - vying for a place in the London Final.

We hope the success of this year's pupils will inspire more Ellesmerians to take up the mantle next year and keep up the strong reputation the College has in these academically focused national awards.