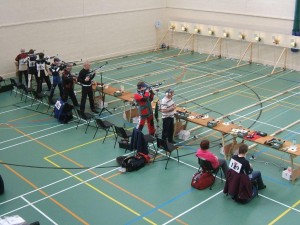 This weekend has seen the return of the Welsh Airgun Association's North Wales Championships to the School.

To the delight of the School, the Welsh Airgun Association held their 2nd North Wales Open Championship in the School's Sports Hall, with competitors travelling the length and breadth of the United Kingdom to compete. Shooting clubs as far away as the Isle of Man, Scotland, East Anglia and the Home Counties were represented.  Locally, representatives from Wrexham, Bridgnorth and Crewe Shooting Clubs participated. The weekend competition attracted over 90 competitors, many staying at the School and other local places offering accommodation.

Bob Blake, Chairman of the Welsh Airgun Association commented, 'Ellesmere College is an an excellent venue for the Olympic Airgun disciplines.  The first class facilities and accommodation, both much appreciated by competitors, made for an enjoyable weekend, resulting in many Personal Bests.' Ian Morris, Captain of the Welsh Airgun Shooting Team and Welsh Airgun Association Match Secretary added, 'It was good to see Michael Bamsey, the British Junior Men's Air Riffle Champion, participating and improving on his current Personal Best and competing against a group of other talented and up and coming target shooters.'

Spectators were also able to 'have a go' with the installation of 2 laser gun ranges. Hazel Wakefield, Director of Enterprises was invited to present the medals at the end of the weekend and she added, 'With the School's long standing Shooting heritage, we were delighted that the Welsh Airgun Association chose to hold their prestigious event again within Shropshire and at Ellesmere College . The hardworking  group of volunteers from the Association transformed the Sports Hall into a 30 lane shooting range and at times the excitement was intense as scores were electronically registered and displayed  after each round of the Olympic Finals.'

Old Ellesmerian, Jenny Corrish, who shoots both for Wales and Great Britain and is the current Senior Women's British Air Rifle Champion was unable to attend since she is currently abroad fulfilling international commitments.  However, the Junior Competition that ran alongside the Senior Air Rifle and Pistol competitions involved 3 current pupils of the Ellesmere College Shooting Academy. Year 9 pupil, Naomi Craig, achieved Bronze in the Olympic Air Pistol Final, whilst Year 11 pupil Richard Belcher and Sixth Form student, Ryan Williams pupil both qualified to shoot in the final 8 of the Junior Olympic Riffle Competition.

Families who are interested to learn more about the Shooting Academy are welcome to join the Headmaster, staff and pupils at the forthcoming Open Day on Sunday 8th May, between 1pm and 4pm. Visiting families will have the opportunity to meet Tom Rylands and David Gregory, the Shooting Academy Coaches and try their hand at laser target shooting.