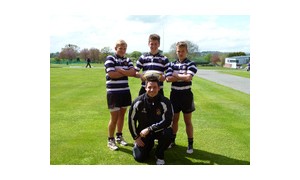 Three talented rugby-playing Pupils at Under 15 level were recently nominated via the Worcester Rugby Academy to represent North Midlands at a national tournament where England and divisional selectors were present to watch, in advance of the Under 16 Rugby trials that will take place later this year in October.

Year 10 pupils, Mike Adams, Tom Grieves and Harry Cross all represented the North Midlands at the event that took place at Broadstreet in Birmingham recently. The 3 pupils, who all joined the School in Year 9 and who are very enthusiastic about their rugby playing, also work hard to improve their game and this year have benefited from the extra rugby training available at the School. Alex Murphy, the Director of Rugby at the School explained, ‘These boys have wholeheartedly embraced the School’s new rugby programme and are now beginning to reap the rewards. The scholarship programme offers year round rugby in the shape of 15 a-side as well as 7’s Rugby, conditioning and individual skill development’.

Ian Williams, Director of Sport further explained, ‘Coupled with a long-standing heritage in producing talented rugby players, since the arrival of Alex Murphy at the School we are delighted to now be offering a training programme through the year, since there are very few schools that offer this kind of year-round development'.

Alex Murphy added, ‘To gain an experience of the individual skill development that is available at Ellesmere College, we will be running a scrum workshop for players and coaches at the School on Sunday the 27th of May from 10:00am’. Anyone wishing to find out more about this opportunity can contact Alex by email, alex.murphy@ellesmere.com or call him on 01691 622321.