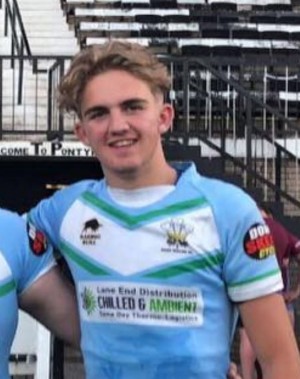 Ellesmere College's 1st XV Team captain, Morgan Johnson, has been called up to play in the Welsh Students Rugby League team to play Ireland, Scotland and England in the 4-Nations competition in July.

Morgan, 17, from Rhosesmor, North Wales, left Ellesmere College this summer after completing his sixth form, and met up with the rest of the Welsh Students squad earlier in the month to play a tough warm-up fixture against the Parachute Regiment - winning 22 - 18 on the night.

Morgan has been a prominent player in the Ellesmere College rugby union squad since joining at the age of 13, playing both the 15-aside and 7-aside games, captaining both the 1st XV and the 7-aside team this year. He has also represented Shropshire, RGC North Wales at U15 and U16, North Mids at U18 as well as previously being capped twice for Wales Rugby league at U16. Last year, he was also selected for the Welsh Dragonhearts open age RL team at just 17 years of age and only missed out after his selection on playing in the Commonwealth games 9-aside Welsh team due to injury.

Morgan commented on his selection: "I was thrilled to be selected and able to represent my country again. It's been a difficult early season for me having missed out on participating in the Commonwealth games rugby tournament due to a significant injury, so it was great the selectors put their faith in me and I have enjoyed every minute of it - despite being battered and bruised after this week's encounter with the paras! All fantastic experience though".

His latest call-up continues the school's tradition for producing international youth players but marks a divergence of their talent into the alternative code game. A proud North Wales Crusader's RL reserve team coach Matt Robinson said, "Morgan has done himself, his family and the Crusaders Club proud with this involvement and performances with the Wales Students Team. To have the opportunity to play for your country at any level is a huge honour and then to play against top class opponents such as England in a prestigious tournament is a big bonus - especially at his young age."