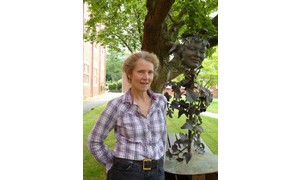 A Fellow of the Royal Society of British Sculptors and Chairman of its Public Sculpture Policy Group will be visiting North Shropshire next week whilst her work is being exhibited at the National Art Exhibition that is taking place at Ellesmere College.

Alongside numerous other artists with national reputations, Sioban Coppinger, who lives and works in the village of Lambourn near Newbury, Berkshire, is exhibiting 4 of her pieces at the inaugural Ellesmere College Art Exhibition.

Sioban Coppinger has created numerous pieces of public art over the last 30 years and is also an Elected Fellow of The Royal Society for the encouragement of Arts, Manufacture & Commerce. Her public work has included The Birmingham Man, which can be found at Chamberlain Square in Birmingham. This large bronze sculpture is of Thomas Atwood, the 1st Birmingham MP. Another of Sioban’s pieces, the Beeston Seat, can be found in the pedestrian shopping street in Beeston, Nottingham. One of Sioban’s favourite pieces can be found at the Marie Curie Hospital in Glasgow. The piece, called Flight of 18 Doves is a creation of handprint casts from the Hospice’s patients, staff the local community.

Some of her more recent work is currently in a touring exhibition with ART AT THE EDGE a consortium promoting maquettes and sculptures representing the Olympics which will open at the OXO Building, South Bank London during the Games this summer.

Sioban’s recent private commissions have included 2 life size doves made from handprints for a garden, a heron made of leaves and a large mixed media drawing of stoats playing. She is also currentlyin talks with Birmingham City Council about creating a piece of public sculpture for a central site refurbishment.

Brendan Wignall, Headmaster, commented, ‘We are delighted that Sioban and a host of nationally known artists have agreed to exhibit their work at the School and we look forward to Big School being filled with an array of artistic creations. We invite members of the public to join us for this prestigious event. Visitors are welcome to explore the school and grounds and light refreshments, lunches and suppers will be available’.