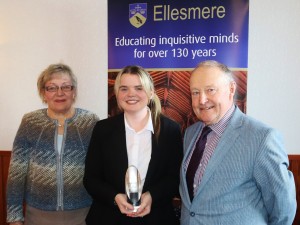 An 18-year-old a classically trained soprano has been awarded a prestigious music scholarship for her Sixth Form years at Ellesmere College.

Rhian Jones was presented with the Walker Music Scholarship at Ellesmere College after a private performance of three songs in the College's St Oswald's Chapel.

The scholarship was created by Tom and Margaret Walker as a thank you for the education of their own two children Rachael and Edward.

Rhian, of Flint, said: "I would like to thank Mr and Mrs Walker for this kind award. I am thoroughly enjoying my time at Ellesmere and am incredibly grateful for the opportunity that I have been granted. The support I have received from both the House staff and tutors has been amazing, it's like a home from home. I have some very inspiring teachers and I hope, with lots of hard work and determination, that I can achieve my ambition of studying Music at the Royal Birmingham Conservatoire or the Royal Welsh College of Music."

Rhian is the third student to be awarded the Walker Music Scholarship following Stuart Green, who went on to study Maths at Imperial College London, and Seren Devismes, who is now studying at the Royal Birmingham Conservatoire.

The scholarship will run for two years supporting Rhian through the Sixth Form and providing her with financial support and mentoring connections to the global network of 7,000 Old Ellesmerians around the world.

Mr and Mrs Jones, Rhian's parents, said: "We never thought that Rhian would be able to attend Ellesmere and are astounded by the generosity of Mr and Mrs Walker who we can't thank enough. We will be forever grateful for the opportunity and support they have given to Rhian and we know that she will do them, us and the school proud. Ellesmere is a very special place, the scholarship programme that they offer has made our daughter's dreams come true."

Mr and Mrs Walker's daughter, Rachael, was awarded a music scholarship when she attended Ellesmere College from 1988 to 1990.

They decided to create the scholarship to help other talented young musicians after being impressed by her progress and obvious enjoyment of the whole music environment at Ellesmere. They said they were pleased to see Rhian settling in and look forward to following her journey.

Nick Pettingale, Director of External Relations at Ellesmere College, added: "I don't believe you can overstate the value and power of these scholarships. I meet many Old Ellesmerians who wish to make a difference and express their gratitude to the school, which contributed to their own success, by giving something back." 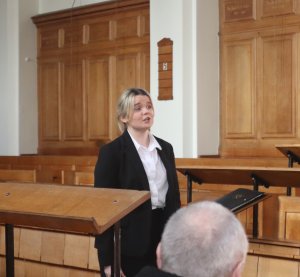