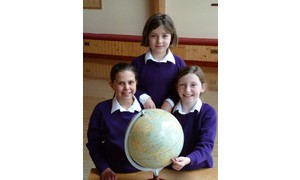 Lower School pupils’ entries to a national writing competition instigated by The Living Rainforest museum in Berkshire have been recognised by the judges and added to the Primary schools’ Highly Commended list.

Year 6 pupils were encouraged to participate in this international letter writing competition, which attracted 273 Primary school entries. Mathematics and IT teacher, and Year 6 Tutor, Bill Hutchings, explained, ‘The essay required the pupils to write a letter beginning Dear UN Secretary General....  Within the letter they had to include reasons why we should be more sustainable and how this could be achieved’.

Since the competition was organised by The Living Rainforest in Berkshire, the main focus was on rainforests and the 3 Year 6 girls were recently presented in assembly with their Highly Commended certificates from Head of Lower School, Sharon Owen. Bill Hutchings added, ‘The girls have done really well to get through this international competition’.