Pupils Accept Their Place at The United Kingdom Linguistics Olympiad 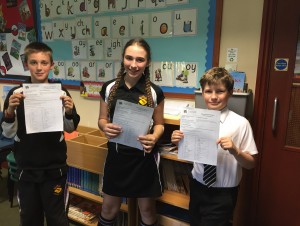 Three young and enthusiastic linguists have been selected as the Schools first cohort for the United Kingdom Linguistics Olympiad (UKLO).

Over the course of the next few months, Year 8 pupils Cal Adlard, Edward Astbury and Carmen Kilgannon will be completing a series of linguistic puzzles under the direction of the MFL Department.

Popular with schools across the UK, the Olympiad encourages pupils to decode language patterns and structures, to apply analytical skills and to identify ways in which the English mother tongue can be used in the acquisition of other languages. Organiser Melody Reynolds, Teacher of French and Spanish and the College's Gifted and Talented Coordinator, said: "We are excited to join many other prestigious schools in taking part in the Olympiad. It offers our young linguists the chance to engage in some 'code-breaking' and to advance their analytical skills, which will be as useful for them in Middle School as they are now."