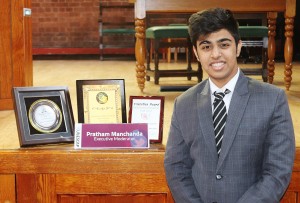 Pratham Manchanda, a Lower Sixth student of Politics, Economics and Chemistry, is a particularly enthusiastic and experienced delegate. Here, he reflects on his most recent achievements and outlines some of the many benefits of taking part in this popular extracurricular activity.

"Model United Nations has always appealed to me because of its opportunities to discuss varied topics of global concern and to practise my conflict resolution skills. I was thirteen when I attended my first MUN event, INMUN in Delhi, India. Winning the 'Best Candidate Award' at this event in my home country has spurred me on to participate in UK and overseas events whenever I can combine it with my studies."

"I tremendously enjoyed the College trip to Leiden, the Netherlands, in November 2017, and it was nice to see my peers win several awards. Throughout the summer holidays, I signed up independently for three further Model United Nations events:

"At all of these events, I attained certificates and scrolls for my participation and work. These were, however, not the main incentive for me to take part: rather, I enjoy the intensive research into other countries' foreign policies and stances; meeting fellow Sixth Formers from all over the world; debating issues of global importance; forming strategic alliances and reaching workable conclusions in a simulation of the MUN proceedings in New York. Model United Nations participation encourages and develops many skills that are valuable for my Sixth Form Years, university and beyond. I would strongly encourage my fellow Sixth Formers to consider taking part in future Model United Nations events."

Preparation for the College's forthcoming Model United Nations trip to Leiden, The Netherlands, from 16-18 November has already commenced, and will include another enthusiastic delegation of Ellesmere College Sixth Formers.