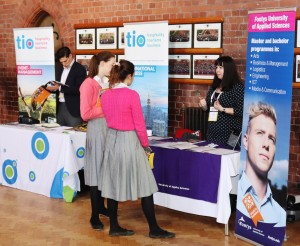 The Fair, hosted in the Ellesmere College Big School, attracted a large number of the Sixth Form students - and some curious Year 11 students too! - and allowed the students to discuss in more detail the options available for continuing their degree studies overseas - course types, subjects, and scholarships.

Mr Philip Wood, Head of Sixth Form, said, "We were delighted to be able to host the Fair for the second year running, and it follows a presentation earlier in the term for Lower Sixth students on opportunities in Europe and Beyond. Our aim is for students to be as well informed as possible about opportunities in Higher Education before they commit themselves to a decision. Each year Ellesmerians take up university places overseas - last year in Austria, Germany, Italy, Spain, The Netherlands and the USA."

Many of the students took the opportunity to discuss their personal ambitions and educational goals with the universities, and next term students will be able to attend the UCAS Exhibition - focusing on UK universities - in Liverpool.