On the Road to Wimbledon - Tennis Academy Players Leading the Way! 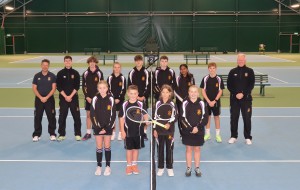 Tennis is stronger than ever at Ellesmere College thanks to a blossoming reputation, state-of-the-art facilities and the Emma Raducanu effect, with its biggest number of high level players in it's history and is putting on more tournaments than ever before.

The Tennis Academy showcases players on a national level - many of whom are aiming for Wimbledon and becoming professional players after they finish their studies. In a recent competitions nine students were crowned winners in their categories, as well as the Yr 7/8 Boys and Girls teams reaching the Regional Final of the National schools Competition – one step away from the National Final:

Stephen Welti, Director of Tennis at Ellesmere College, said: "This year we have seen an increase in the number of people playing at a much higher level. Rather than one or two outstanding players, we have got a whole squad of them. It is better than we have ever had and it is fantastic to watch. As a developing sport in the school we have just climbed a big step and many students are showing incredible dedication, improvement and talent in their tennis."

Four years ago Ellesmere College opened its state-of-the-art indoor tennis centre which has four courts - more than most other schools in the country - and it means they are able to train every day, whatever the weather.


"The tennis we are seeing at the moment is fantastic," Mr Welti added. "The tournaments are of huge benefit to our players and these are tournaments at all grades, including high level tournaments sanctioned by the LTA. The impact of the improved facilities and the success we've had has been very clear; we are seeing parents and pupils calling the school asking to join now specifically for the Tennis Academy as our reputation goes up and up. But more than that, even at a lower level, tennis is really enjoying a purple patch. We have seen an increase across the board after Emma Raducanu's success at the US Open. We coach over 100 students every week and are attracting new players all the time."