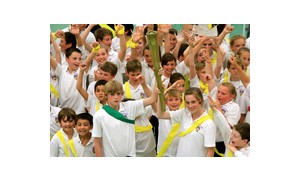 Although the weather for this year’s Lower School Sports Day meant that the event had to be held indoors, the rain did not dampen the spirits of the pupils, and the event was made particularly special with the loan of an Olympic Torch to be paraded at the start of the afternoon of sport.

All Year 3 to Year 8 pupils participated in the Sports Day  which was held in the School’s Sports Hall. As one of their last remaining roles as Lower School Head Girl and Boy, Year 8 pupils, George Newton and Mia Foster,  paraded the Torch around the Sports building.  The Olympic Torch had been loaned by the Royal Mail Postman and local Torch Bearer, Ian Watkins, who has delivered the School’s post for many years.

Ian Williams, Director of Sport, commented, ‘With the London 2012 Olympics happening next month, we were delighted that we had the opportunity for the Olympic Torch to be loaned to the School and paraded. Many photographs of Lower School pupils were taken with them holding the Olympic Torch and this made it a memorable occasion for all’.