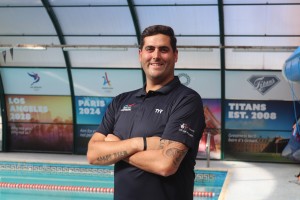 The director of swimming at Ellesmere College is relishing the opportunity of helping Team GB to Olympic success in Tokyo next summer.

Alan Bircher has already achieved a great deal of success in competing and coaching and is just one of eight coaches selected by the British Olympic Association to accompany the Team GB swimming squad to Japan.

The former World and European silver medalist swam for Team GB from 1997 to 2008 racking up 10 British Championships and two European Cup titles. More recently he has coached World, European and Commonwealth medalists along with multiple national champions and medalists.

He is also playing an integral role in the ongoing success of the Ellesmere College Titans swimming team - which boasts a record unrivalled by any other programme in the country in providing swimmers to represent their country.

Alan will now form part of the select team of eight who will be responsible for ensuring Team GB swimmers will be at peak performance heading into the Olympic Games.

"It's a great honour to be selected as a coach for Team GB at the Olympics - particularly when you consider how few of us will be going to Tokyo," he said.

"My role will be to lead the marathon swimming, open water, which is the same position I've taken up at the last European Championships in 2018 and this year's World Championships.

"The Olympics are always something particularly special for competitors, Team GB has some excellent swimmers right now and it is up to our coaches to ensure the team is fully prepared and ready to go.

"It's extremely exciting to be nominated for the games and the preparations. I really enjoy the job I do and try to ensure the swimmers I coach enjoy what they are doing. I always believe that if you work hard and prepare properly then you can achieve anything.

"I'm passionate about the Ellesmere College Titans and proud of the success the team has had since it was formed in 2008. This includes a minimum of 18 students making qualifying times for the Olympic trials in London 2020 so Ellesmere College might well be well represented at the 2020 Olympics."

"No other programme in Great Britain has come near to the success we've had and the number of athletes we've put on international teams. This includes 13 students making qualifying times for Tokyo so Ellesmere College is set to be well represented at the 2020 Olympics."

Ellesmere College, located in Shropshire, was also recently named in The Top Five Best Schools for Future Olympians guide produced by Tatler Magazine - the only school outside the south of the country.