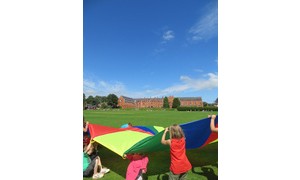 With Olympic fever hitting the country there has been a flurry of activity taking place at the School this summer. Three weeks of Multi-Activities saw over 75 children take part in a variety of games, sports, drama, and crafts. This included designing a flag, stamped with their hand prints and names to commemorate the London 2012 Olympic Games.

The final day of the course saw children split into national teams to compete in Olympic themed events such as diving, synchronised swimming, sports and games. The countries represented were America, Australia, China, and Jamaica, with each participant and team captain dressed in their national colours for the day’s events. Hannah Phillips, the Australian Team Captain, commented, “This year, the ‘Ellesmere Olympics’ was an event that the children looked forward to all week. They enjoyed cheering on their teams and thoroughly enjoyed the day’s activities.”

The Sports Centre Manager and Holiday Course Coordinator, Chris Rogers, commented, “With the nation gripped by the Olympics our children really got into the spirit of the events we put on. We are delighted that this has been our busiest summer and we have seen more children than ever take part in the courses.”