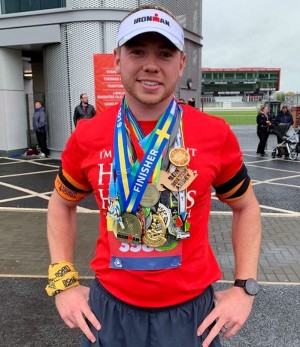 A former Ellesmere College student has completed a gruelling 13-month challenge to hit his target of raising £30,000 for Help for Heroes.

Ex-Royal Marine Stephen Bannister set himself the challenge when he turned 30 to raise £30k for the Armed Forces charity - and actually achieved a total of £34,800 when the fundraising campaign ended last month.

The Old Ellesmerian set himself the goal of completing a minimum of two events every month during the 13-month Run For 30 Campaign and said he was delighted to have beaten his fundraising target.

"We have done it! Donations are still coming in but the total currently stands at a huge £34,800 for Help for Heroes," he said.

"I would like to say thank you to everyone who has shown their support and belief in me and the campaign this past 13 months. This month I will be visiting Phoenix House, Catterick, to present a cheque for the final amount.

"Turning 30 in September 2018 motivated me to raise £30k for Help for Heroes because I'm ex-forces and feel I've been fortunate in life, so I launched my Run For 30 Campaign.

"My aim was to do all I could for Help for Heroes. I have been fortunate and in some cases lucky in my life and I also consider myself lucky enough to have served as a Royal Marine in the Armed Forces.

"I had 28 events lined up from very early on, from fun mud runs to Iron-Man triathlons and finished the campaign with a black tie charity dinner. We have a Wall of Patrons where any individual who donated £30 plus or any corporate sponsor donating £500 plus had their own 'brick' on the wall.

"There have been some amazing gestures of support along the way and I am extremely grateful to everyone who took part for their efforts and donations."

Brendan Wignall, Ellesmere College headmaster, said: "This is an amazing feat and everyone at the college would like to congratulate Stephen and all those who have supported his campaign on such a marvellous effort.

"There is a close bond between the College and our Old Ellesmerians and we are always delighted to hear how they are getting on. Stephen clearly has a close affinity with the Armed Services and feels passionately about the Help for Heroes charity. His campaign has been a highly commendable achievement."

Ellesmere College is located in north Shropshire. For more information about the Ellesmerian Club for alumni please visit: www.ellesmere.com/The-Ellesmerian-Club.