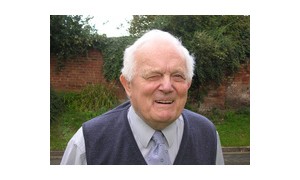 George sadly passed away on 4th May 2012, just 3 weeks before his 92nd Birthday. With his family’s permission, I decided to publish my interview with him as a tribute to this lovely man.

George was in Talbot House from September 1933 to July 1939. He thoroughly enjoyed his time at Ellesmere and is grateful for all he learnt there, particularly the nurturing of his Christian faith which in later years he has found still brings him joy and excitement. During his time he was a school prefect, Cadet Under Officer in the OTC, Captain of Hockey for three years, Captain of the College Shooting Team and a Server in the Chapel. He left school just before WW2 to start a dental course at Manchester University where he soon realised that he was too clumsy with his hands for patient safety. He was also unsettled because many of his friends were joining the Services. So with the blessing of his parents he switched to train as a Radio Officer in the Merchant Navy because, in spite of his training in the OTC, George felt he could not fire a gun in anger and so he joined a non-combatant service. This started six years’ service – which George called his Gap years – during which time he visited many countries. He told me stories about one or two exciting moments – on one occasion whilst sailing in an Atlantic convoy his ship was hit by a bomb, the crew took to the boats resulting in ten days or so on board one of the convoy escort vessels, HMS Enchantress, which prior to the war had been the Royal Yacht. Another near escape was a torpedo fired from a distance at the convoy, which passed just ahead of his ship but struck the ship in the next row. The ship sank immediately with the loss of all but two of its crew. Apart from these incidents George’s ‘gap years’ passed without much excitement; he was fortunate because proportionally the losses in the Merchant Navy were greater than those in any of the three Services.

After his discharge in April 1946, George joined a small firm of wholesale booksellers owned jointly by his father and another family which then supplied books for small libraries in newsagent’s shops, and later to public libraries. George started as a ledger clerk and retired 39 years later as Chairman. Although he had no qualifications George claimed he knew more about book keeping and employment law than most qualified accountants and solicitors. George found his niche with the firm and is grateful for having worked for just one company with never the fear of redundancy and with access to every type of book, except, he was pleased to say, pornography!

In retirement George assisted in the Diocesan office at Chester and then became involved with The Gambia where his church supported the work of the third world charity ActionAid in a project ‘up country’. Later he assisted the Anglican Church in that country so he understands firsthand the issues of African poverty. Now in his nineties, George follows his hobby of genealogy and remains a passionate Manchester United supporter which pleases me no end! He has three children, eight grandchildren and one great grandchild all of whom are the joy of his life.