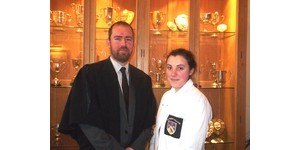 The start of the summer term has seen the arrival of 2 new members of staff to the School’s Science Department and a new Head of Biology as well as a Chemistry Laboratory Technician have been busy introducing themselves to colleagues and pupils.

Reuban Strain, achieved a BSc degree in Biomedical Science before gaining his PGCE teaching qualification at Nottingham University. Whilst his first job was at Trent College in Nottingham, Reuban also spent a year living and working in the Nelson region of New Zealand, teaching at Motueka High School. More recently, he worked at Kelly College in Tavistock, Devon for three years and has  moved with his family to North Shropshire to take up the position of the new Head of Biology from Dr. Chatterjee, who is also Head of Middle School and who will remain teaching Biology at the School.

Deputy Head Academic, explained, ‘In 2010, when Dr. Chatterjee was promoted to the role of Head of Middle School, it was always the intention in the future to give the position of Head of Biology to another teacher and, now, with the growing number of pupils in Middle School, I am delighted that we have recruited Reuban for the role’.

Victoria Inge has also joined the Science Department as the new Chemistry Lab Technician.  She graduated last summer from the University of York with a BSc in Biological Sciences and studied Chemistry at A-level.  She is interested in wildlife and is currently studying part-time for a postgraduate certificate in Biological Recording and Wildlife Management.  Victoria confirmed ‘ I am also interested in classical music and am looking forward to dusting off my violin and playing with the School’s Orchestra’.