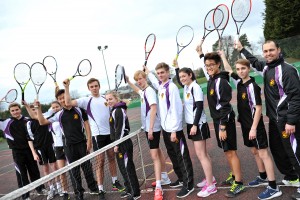 Ellesmere College are celebrating a double success in the AEGON Team Tennis Schools Senior Championships after two of their sides qualified for the national finals.

It is the sixth successive year that the college has been represented by a squad in the national showpiece, which will this year get underway in March and be held at one of the Lawn Tennis Associations' (LTA) 19 high performances centres in Bolton.

The 'Girls' and 'mixed A' came through another tough round of qualifiers to make the Bolton Arena event and represent Ellesmere. Both teams continued their journey towards national success by defeating Canon Slade, Alderley Edge, Moreton Hall and Runshaw College along the way.

In the regional knock out rounds both teams played some exciting tennis against Canon Slade School from Bolton. The girl's team proved too much for their opposition and qualified by virtue of winning all of their singles matches to reach the finals. The mixed team featured against a strong Cannon Slade team in a clash that saw Ellesmere secure an 8.0 victory. Stephen Welti, coach at Ellesmere College said "I couldn't be more proud of how the students have performed. The great strength of competition is that it is a team event and players have worked hard together to achieve success".

The tournament is a programme of three nationally organised competitions, which allows students to play regular competitive tennis. The School Senior Championships always proves popular with over 13,700 players taking part from some 3,000-school tennis teams.

From May, tennis players will be able to enjoy their new indoor centre, which will house four high performance acrylic surfaces similar to those used at the US Open and will open this summer.